How does one celebrate 4 weeks of intense training and learning?

Going to a beach city and sitting on your ass for a few days.

What does one not anticipate when going to a beach city for a few days?

Rain. That’s what one does not anticipate
. Rain.

What did I do my first weekend after finishing four weeks on intense training and learning? I went to a beach city where I planned to sit on my ass at the beach and see a few museums, see a museum and climb a mountain or two.

What did I NOT plan for? You’re a winner–RAIN.

And I think he was laughing at Meg and I with all of the ridiculousness that happened.

Saturday morning Meeg and I got on our flight to Da Nang with a rough outline of what we wanted to do:

That all went to shit with the rain.

Saturday went according to plan. We landed (Peep this baby and his swaggy hat)

**weird side story about the taxi ride.

I know I can be pretty paranoid because I’ve watched a lot of traveling horror movies with my dad, but I would rather be paranoid than you know, dead. This is not me being a stuck up American, but I know being an American in some countries means something, not special treatment per se, but just different, I can’t explain it. So, when the taxi driver immediately asks Megan and I where we are from, NOT where we are going, I’m already confirming in my head that the taxi man is going to sell Megan and I for a couple million dong and my apple will be our way out of trouble by crushing the drivers skull. After trying to convince the driver that we were from Ho Chi Minh City (technically, we are), we tell him were from America.  He immediately whips out his phone, calls someone and starts speaking quietly to whoever is on the other line in Vietnamese (Like we can understand anyway).  Inside I’m freaking out but we’re still driving on a pretty busy road so I chill out a bit. Just a small bit. When we are what seems like 10 minutes away he claims he doesn’t know where he’s going so we’re going to pick up his, “brother-sister-wife.” Those were his exact words.  No way Jose, no you don’t, but before we can do anything about it, a woman is getting in the car saying she is helping her husband. ??!??!?? what kind of family dynamic is this?

To really weird me out we turn down this barren road. At this point Megan and I are whipping out our phones to make sure we’re going the right way (we were). After probably a mile the man pulls over, the woman hops out of the car and waves goodbye. My stress level and imagination is all over the place at this point. After another mile we hit this teeny town that matches GoogleMaps. We get to our hostel alive and sweating from stress and fear of being taken. The driver tries to ask for an extra 100,000 dong and we promptly reply, NAWT, BYE.

So he was a normal taxi driver and I overreacted. Whatever.

After that fiasco, I can happily say Hostel Backpackers had room for Meeeg and I. In a 12 bed mixed dorm. Always a good time. We quickly changed, grabbed food, rented bikes and pedaled down to the beach, which was about a 20/25 minute bike ride? Whatever, it was worth it. 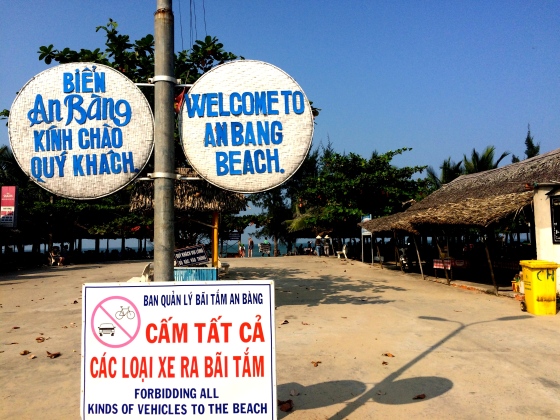 We stayed until about 5? so we weren’t on the road when it got dark because that would absolutely be a disaster.

We were pretty lucky when we got back because the room was empty so we could shower without the awkwardness of changing in front of random humans.

Anyone who’s anyone (locals) told us that when we were in Hoi An we haaaad to try the Cau Lau, which is best as street food that you can only find in Hoi An. SoOoOo for dinner, we found a street food man that looked chill and grubbed. 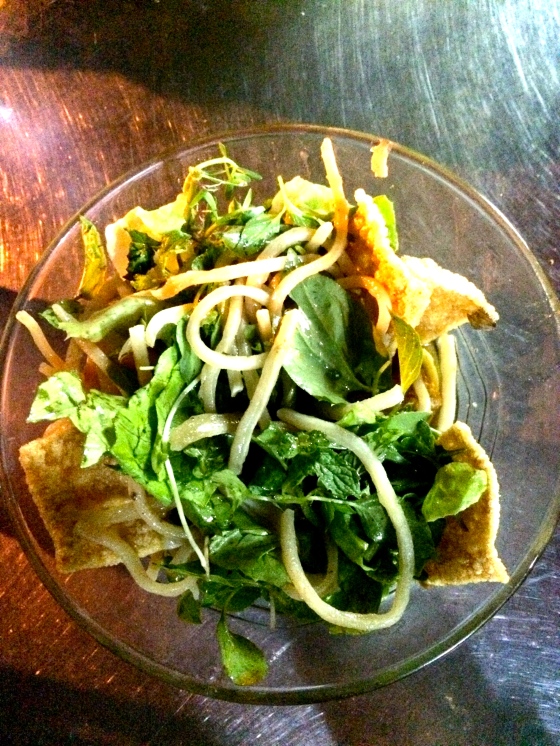 It’s a bit hard to explain what it tastes like.  Kind of like Pho, with less broth combined with a minty taste that came from the mint (obviously) and a sweet crunchy texture for contrast.

After dinner we went to the island-y peninsula side of Hoi An to get a few drinks and to see if anything was going on.

But after a few beers we were feeling less excited about going out, more a exhausted by the minute, and pumped to get to our hostel (life is funny, right?), so we walked home and knocked out.  I only woke up twice to randoms coming in and out of the room.

The realization of what the rest of our weekend would be like came in the form of loud rain drops the next morning.

By the time we left to get breakfast at this delicious place we found the night before called CocoBox, the weather looked like it might try to fight for our right to go to the beach. But after breakfast it started torrential downpouring. So we chilled in cocobox and ordered cafe sua da (coffee with milk, I’m so Vietnamese) to wait out the rain.

When it did finally stop raining we hopped on our bikes to try to see more of the ancient town. But on the way there I felt a few drops. And within a minute it was coming down. Hard.  We stopped biking, took a few photos because we looked dumb as fuck and when you look that ridiculous you have to take pictures, and headed back to the hostel.

Little Hoi An had nothing left for us. It was time to see Da Nang.

We had a private car (the hostel manager’s uncle–seems safe enough, right?) take us to DaNang where we hoped there would be room in the homies hostel room…