Without a single fear of being kidnapped or sold — we made it to Funtastic!

And if things couldn’t get any better we were in the same hostel as our friends! Can I get a holla on avoiding awkward hostel roommates!?

Especially the ones that snore…..

Everyone was kinda burned out from the day so we took a few hours to chill out/shower/nap whatever before dinner/night out.

I can’t tell you much about where we went for dinner except that it was walking distance from the Dragon Bridge and within five minutes of sitting down Megan saw a rat, which promptly turned my rat vision to one hundred and I also spotted the same sucker within 60 seconds. In my head I thought of this Tweet: “Saw another rat during dinner. Wish I could be surprised.” I didn’t tweet it, but you saw it here first suckas. Now when I see rats/cockaroaches in places they shouldn’t, I’m more or less terrified than disgusted.  I used to be more of the, “Oh hell no, that is disgusting, no way am I eating here.” Now I try to stay calm, but fail and immediately start sweating and pull my feet into my chair just in case we have a bold rodent on our hands that has the balls to come near me like the Young Satans we had in Cambodia.

George, king of selfies has been nonstop asking me: “Hey Ta, is Joey alive??” Joey is a young lad that is in Vietnam with me (Just turned the big 2-6)—he’s one of those guys that just doesn’t check his apps, whereas George clings to his. Not a bad thing, Geroge. So I made sure to send George a photo of his bf as soon as we got to din.

Every Sunday  at 9PM the Dragon Bridge comes to life in the form of bright lights, blows fire and spits out water.  The water part is kind of like going to a Shamu Show at the now forever evil, Sea World.  People show up with umbrellas, ponchos and stand in the wet zone. It’s actually pretty hilarious to see. So after dinner and a few beers we walked over to see the show — and I’m really glad we did. I actually felt pretty giddy about the whole thing.

When the show ended (sadly), we meandered over the bridge and walked to a bar that had loud music and looked sorta packed.  One would think I would socialize with the locals or the westerners and get to know people.

Nah. I found a foosball table and wanted to play that instead.  There was a Vietnamese woman standing behind us that was really into our games. She would jump at our moves and her arm movements would match whoever was spinning.  After a few games we asked if she wanted to play.

She ended up being on my team and I already accepted the fact that we were going to lose because she was basic and didn’t have any drive to win.

You gotta love it when people prove you wrong.  All the boys had major ragrets about not picking her up to be on their team.

She KICKED ASS. Seriously. She was so good. Joey even went as far to say she was a Ringer.  She was scoring goals, blocking them, basically she was my teammate from heaven. I think by the end of it we had won 3 or 4 games straight. And they were ass whoppings. So rad. 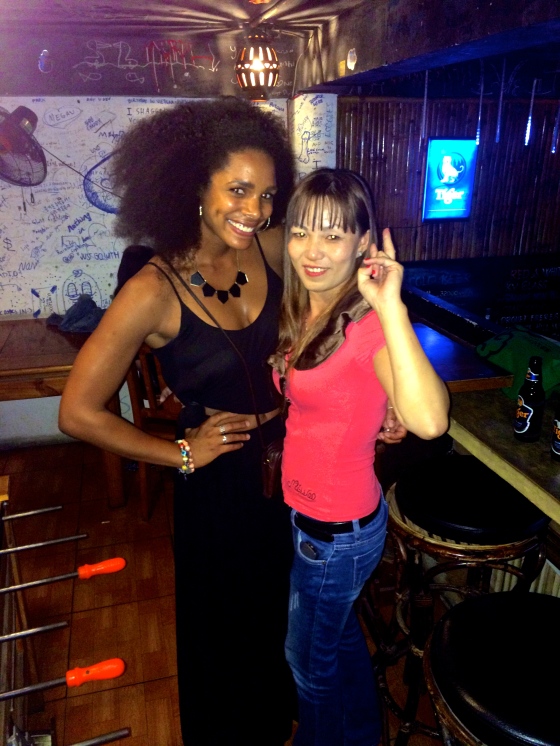 Huge shout out to my #1–Love you girl!

Rain was again the theme of the day so my dreams of spending my day on my ass on a beach was thwarted.

So Meeeeeg and I made new plans!:

It seems to be a running theme that every Cathedral Meeg and I go to is closed. And this fabulous Cathedral in Da Nang was closed as well. AND we went on a Sunday! However, they did have a beautiful shrine like area for a man I do not know, with b-e-autiful flowers. 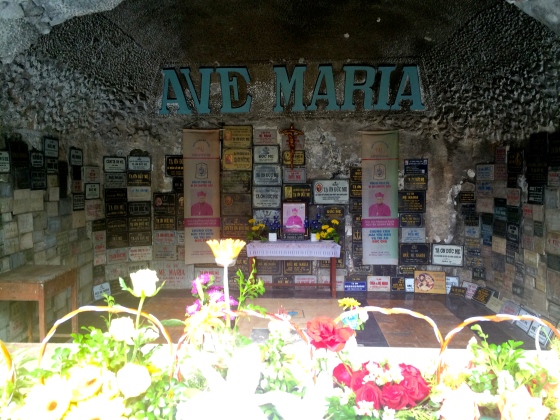 So all in all the Cathedral wasn’t a total loss. I can’t say the same for the Cham Museum.

The Cham Museum is interesting because it definitely has architecture that was discovered early 1900s, but I felt as if they did a poor job of putting the art on display in a believable, somewhat professional way.  For instance, as soon as we walked entered the museum we saw a member of the staff rebuilding one of the structures or creating one right in front of us. They weren’t trying to hide it, there wasn’t a sign explaining what was going on, just a man working on what appears to be ancient art. That’s not normal, right? I’ve never seen that before. This website makes it seem waaaaay cool. I didn’t get any of these vibes when I visited.

Some of the pieces looked pretty awesome

But then we would walk into rooms with no art.

Why am I at an art museum with no art?

Where da art at.

While this is the oddest thing I’ve seen in a while.  This is supposed to be fragile, right?

Who did this!? This is supposed to be fragile!

After walking around and looking at all of the art (took us 30 minutes and we were walking slow) Megan and I just had to laugh at how ridiculous the entire experience was.

To lift our spirits a bit/make our day feel longer Meeg and I attempted to walk to Lady Buddha. LOL.

Halfway to the beach it started torrential down pouring on us. We took cover, waited it out until it seemed to let up a bit. And we started our mission again. And 20 minutes later it started raining again. But this time we didn’t have cover so we trudged on. At this point you just have to laugh because you can’t really see anything but we were still powering through. #AnythingForLadyBuddha.  I already knew climbing Marble Mountain was out of the picture with the sketchy ass weather so I was determined to see Lady Buddha.

After another 30 minutes of torture we were on a busier road and we were able to hail a cab which drove us up to Lady Buddha. Thank the Lord we didn’t attempt to walk up the hill because we probably would have collapsed of exhaustion. The road up was so windy and steep. Hashtag blessed! We did the right thing.

I can’t tell you how happy I was to get to the land of Lady Buddha/all of the male Buddhas. Well if you saw any of my snaps you could see how happy I was. They were everywhere with different poses/expressions/outfits. It was awesome. And beautiful.  The view gave us an all access view of the South China Sea (Yea, I had to Google that). It was stunning. Annnnnnd it had stopped raining. Lucky us.

I had a ton of fun taking selfies with a dragon I decided to call Mushu from Mulan. Yes, I know Mulan takes place in Japan, but in my mind the dragons were Mushu so that was that. 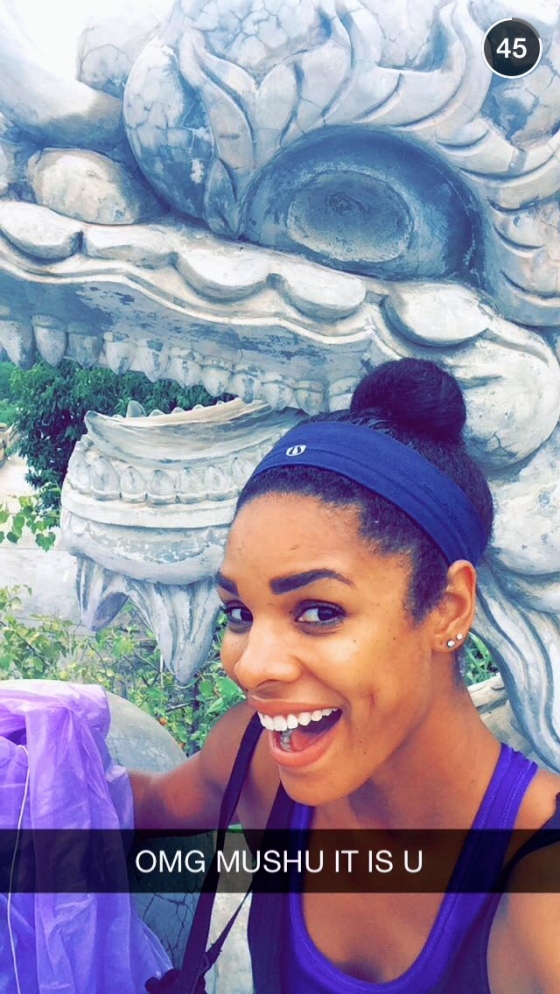 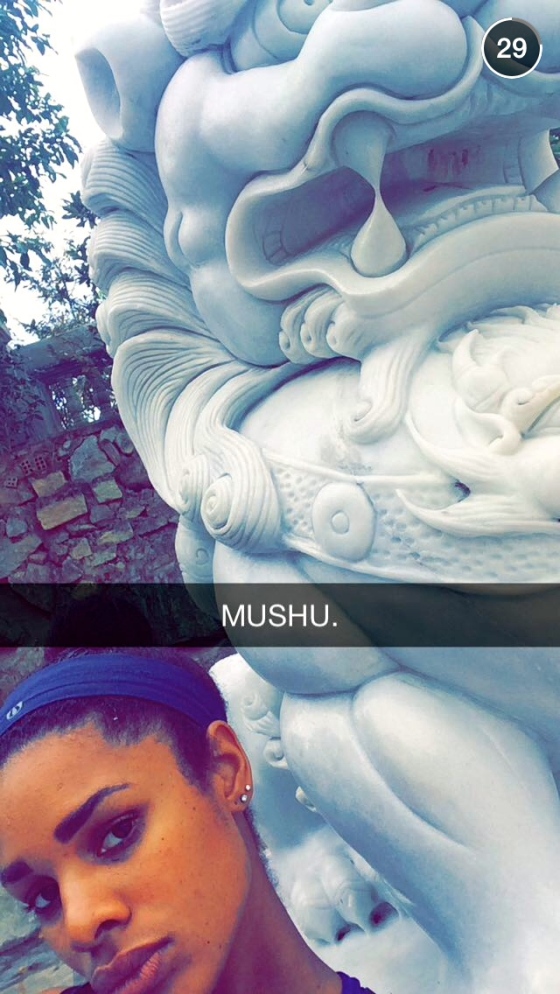 I just had fun taking selfies in general I guess…. 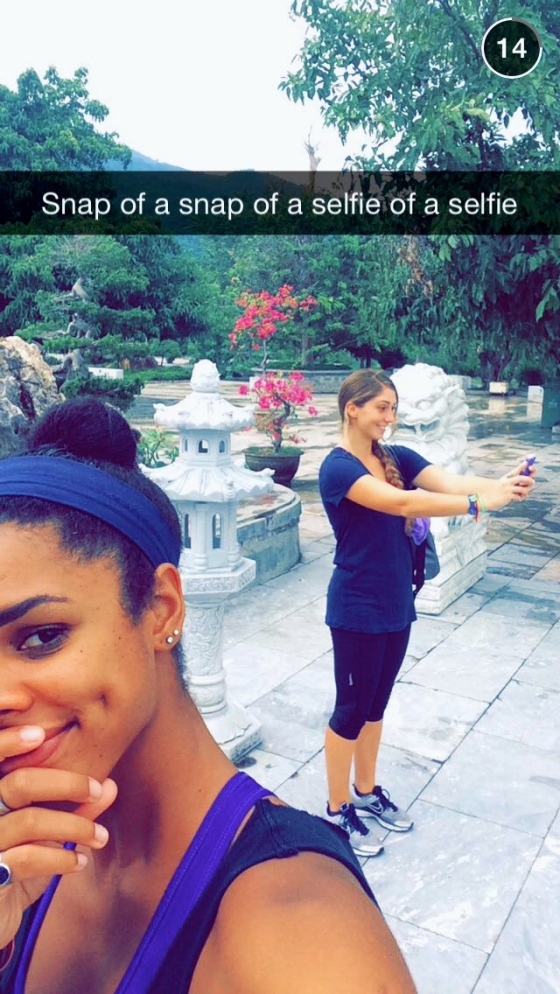 Buddha and some of his homies 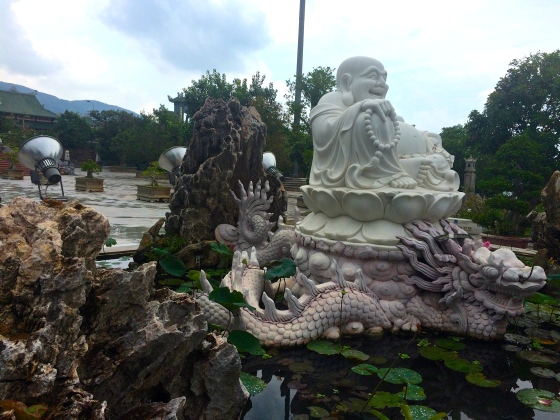 A few of my favorite Buddhas 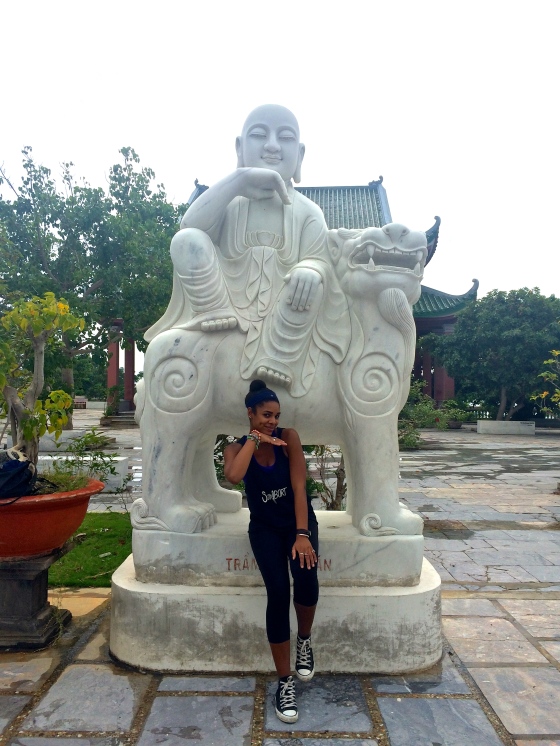 And of course the Queen, Lady Buddha.

She was a billion times bigger than I expected/imagined so getting a photo with her wasn’t easy, but with exceptional photography skills, we were able to make it work.

Thank you Lady Buddha, you made walking in the rain worth it.

Our flight back to HCMC left at 8, so we chilled for the night.

But hey, on the flight back I diiiiiiiiid get a photo of Meg sleeping HAHA payback.

When we landed Meeg and I both had interviews to kick ass in. Aka ‘getting our lives started.’